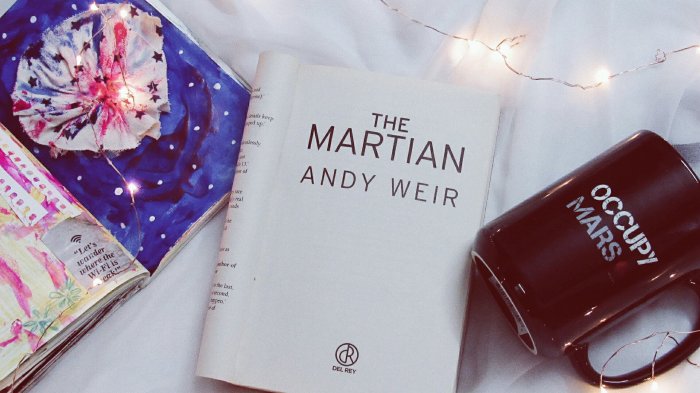 Six days ago, astronaut Mark Watney became one of the first people to walk on Mars.

Now, he’s sure he’ll be the first person to die there.

After a dust storm nearly kills him and forces his crew to evacuate while thinking him dead, Mark finds himself stranded and completely alone with no way to even signal Earth that he’s alive—and even if he could get word out, his supplies would be gone long before a rescue could arrive.

Chances are, though, he won’t have time to starve to death. The damaged machinery, unforgiving environment, or plain-old “human error” are much more likely to kill him first.

But Mark isn’t ready to give up yet. Drawing on his ingenuity, his engineering skills — and a relentless, dogged refusal to quit — he steadfastly confronts one seemingly insurmountable obstacle after the next. Will his resourcefulness be enough to overcome the impossible odds against him?

First of all, this book is the first science-fiction that I have read which was just out-of-the-box hilarious. The author Andy Weir has a brilliant style of reading that keeps the reader intrigued as well as thinking at all times. The plot was not quite unpredictable but it was mindblowing nevertheless.

The characters were all brilliantly portrayed and every character was given enough depth and development. I loved Commander Lewis and Mitch the most. They both were strong and bold characters throughout the book and had a vibe of leadership around them. I also liked how Andy tried to make a very little character such as Rich Purnell give away the most amazing plot twist.

Mark watney, the protagonist, has the ability to impress the reader beyond limits. His wits, knowledge as a botanist, engineer and an astronaut was amazingly portrayed. Best of all was his sense of humor which did not fail to make me giggle throughout the book.

“I started the day with some nothin’ tea. Nothin’ tea is easy to make. First, get some hot water, then add nothin’.”
― Andy Weir, The Martian

“He’s stuck out there. He thinks he’s totally alone and that we all gave up on him. What kind of effect does that have on a man’s psychology?” He turned back to Venkat. “I wonder what he’s thinking right now.”

To sum it up, it is an amazing book that everyone should read and experience. I rate it 5/5.

You can get your copy here:

You can call me Ollie. I like reading and talking about books and dramas. I love true crime, psychiatry and psychology. I am non-binary and I use they/them pronouns. My favourite author is Sylvia Plath and I aspire to be as good as her. View all posts by OliverThePuppet